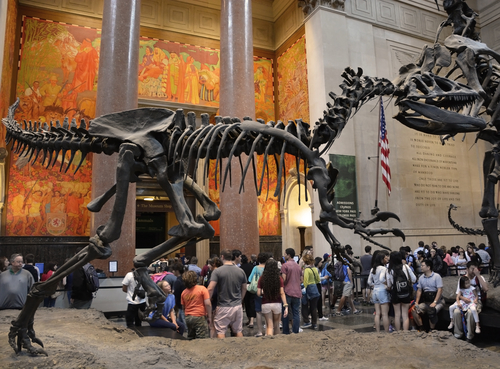 While “Jurassic Park” and its sequels brought dinosaurs to life on the big screen, an exhibit in Philly is bringing them to life right before our eyes.

“Jurassic World: The Exhibition” at Franklin Institute recreates the magic of the movies, adding a dose of education to your entertainment. The world-renowned, all-ages science museum, located just two blocks from your Dalian on the Park apartment, opened the dino-themed exhibit in the fall — and it closes April 23, so don’t miss your chance for this action-packed adventure!

The exhibit transports guests to Isla Nublar, the fictitious island featured in the films, where scientists successfully cloned pre-historic dinosaurs. You can walk among the larger-than-life creatures, including a 24-foot Brachiosaurus and a towering Tyrannosaurus-Rex. Enter the Raptor Pad for an intense training session and even stroke a Pachyrhinosaurus in the Gentle Giants Petting Zoo.

The animatronic wonders were crafted with input by Jack Horner, the paleontologist who was the behind-the-scenes mastermind of the “Jurassic” films.

Your stroll among the dinos is enhanced by the science lessons you pick up along the way (it is a museum, after all!). Throughout the exhibit, visitors can learn all about the different types of dinosaurs as their protoypes graze and gallop around them.

“Jurassic World” is an exciting, eye-opening experience — for kids of all ages.